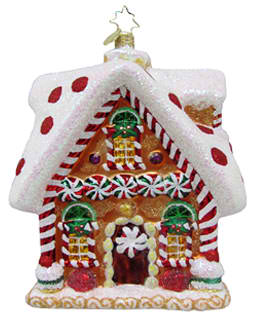 For more than 23 years, Christopher Radko’s glass ornaments have graced the trees of American homes.  The sparkling glitter and detailed workmanship of each piece has made ownership of these ornaments coveted throughout the world.  Beginning in 1986, Radko started making his own ornaments when he found, upon attempting to replace his mother’s heirloom ornaments after a Christmas “accident,” that there were no fine quality ornaments available in the states.  So in the decade of plastic and melamine, Radko turned to glass and gilt, in an effort to recreate the spirit of the ornaments he knew in his youth.

Radko has since sold his ornament business, which had quickly grown from a hobby to a multi-million dollar company.  Radko’s ornaments, however, are still in production, with new pieces out every year made to Christopher’s standards of quality and beauty.  These collector’s items are also valuable because one-third of them are retired each year!

The themes of Christopher Radko ornaments harken back to a time of the pre-commercial Christmas.  Dazzling snowmen, jolly elf-like Santas, and old fashioned hearths decked with children’s stockings are the staples of the collection.  Every ornament is different, however, so that each year you can add something to the tree that reminds you of that particular Christmas.   As the company says, “A Christopher Radko ornament is a work of heart!”

At Christmasornaments.com, we are celebrating the release of Chistopher Radko’s 2010 ornament collection. Stop by and take a look, and we’re sure you’ll be charmed by the warmth and light of these gorgeous holiday keepsakes.

2 thoughts on “A Quarter Century of Christopher Radko Christmas Ornaments”