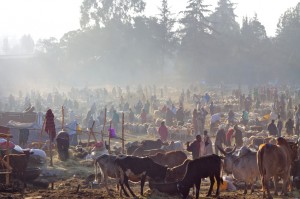 Christmas in Ethiopia:  Ethiopians arrive at an animal market on January 6, the day of the Epiphany and one of deep meaning in the country.

Ornamentshop.com’s global tour of the traditions of Christmas has revealed one basic truism: there are many similarities in Christmas customs, from food to decorations.

That is, until the tour disembarks in Ethiopia.

This African country, home to King Balthazar – one of the three kings – is nothing if not original in how it celebrates Christmas, which Ethiopians call Ganna.

From above, the fields could be mistaken for the stage of many Olympic events, for Christmas in Ethiopia is distinguished by field games and especially Ganna Chewata, which is played with a curved stick. This game is similar to hockey insofar as players try to knock a rur, or wooden ball, into a small hole in the ground.

Meanwhile, children enjoy playing Leddat, a form of field hockey in which sticks with hooks on one end are used. The game is played by two opposing teams, and the stick and ball are made from locally grown trees. The teams often represent distinct regions of Ethiopia, and the rivalry can be intense.

What is the connection between these games and Christmas? Ethiopians are proud to point out that according to legend, the shepherds played Leddat to celebrate the news of Jesus’ birth.

Christmas in Ethiopia: Food, Dance and a Symbolic Baptism

Once they put down their sticks, Ethiopians enjoy a feast that is planned around the injera, which is a flat piece of dough that resembles a tortilla. Guests tear off a piece of injera and use it as a scoop to eat another Ethiopian favorite: wot, a thick and spicy stew that contains lamb, beef, vegetables or beans.

The festivities continue during Timkat, a three-day celebration that starts on January 19. During this symbolic baptism, families walk to a stream or sunken pool in a lively procession that includes chanting, dancing and singing.

Adults follow priests to the water, where they bless it and splash it onto people to cleanse them of sin. At the water’s edge, the wooden figure of a certain well-known man reminds revelers what Christmas in Ethiopia is all about: Balthazar, who joined Melchoir and Caspar, of Arabia and Tarsus, respectively, on an important journey to Bethlehem.

Bring the story of Christmas in Ethiopia closer to home by sharing it with your friends on Twitter and Facebook, for there is so much more to learn about this fascinating country.

One thought on “Christmas in Ethiopia: Symbolism Amid Fun, Games and Food”