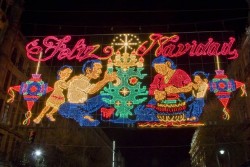 Ornamentshop.com also was watching with anticipation as our global tour of Christmas traditions chartered a stop in Mexico. As expected, this festive, music-loving country makes the most of the Christmas season.

Given the country’s reverence for the Virgin Mary, it makes sense that Mexico’s Christmas season begins on Dec. 16, with Mary as the focal point. The nine days before Christmas in Mexico are known as las Posadas, which means “inn” and commemorates the nine days of Joseph and Mary’s long journey through Bethlehem. Every night, candlelit processions wind their way through Mexican towns and cities, with “Mary” riding a donkey and “Joseph” walking beside her.

The last posada takes place on Christmas Eve and ends at a church, where the likeness of the baby Jesus is placed in a cradle before Mexicans attend midnight Mass. Often, the celebration lasts all night long with song and dance. The festive mood is sometimes punctuated by fireworks and the sound of bursting piñatas. 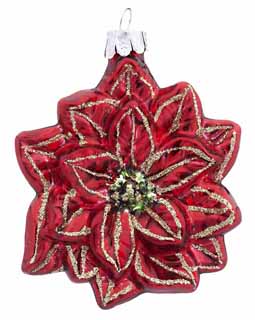 While Mexicans are rightfully proud that piñatas have become so closely associated with their country, they take equal pride with having spread an appreciation for the poinsettia. The first poinsettia is believed to have been used as a decorative piece during Christmas in the 17th century, when Mexican Franciscans thought that the plant’s robust, red leaves made a festive statement. Today, the plant is ubiquitous in Mexico, and many people still believe that it is inherently blessed.

After the excitement of las Posadas, Christmas in Mexico is relatively quiet by comparison. Some families exchange gifts while others wait until Jan. 6, which is known as Dia de Los Reyes Magos, or Three Kings Day.

Either way, food remains a huge attraction, and tables are often full of the dishes people associate most with Mexico: tacos, enchiladas, tamales, quesadillas and chiles rellenos, or green peppers stuffed with cheese or ground meat. Most meals include Mexico’s national dish: mole poblano, which is a thick, rich and spicy sauce that includes an intriguing combination of chili peppers, almonds, peanuts, sugar cinnamon, cloves, day-old bread and chocolate.

To top it all off, many Mexican families prepare a donut-shaped cake with a small doll inside. The guest who receives the slice must host a tamale party on February 2. At most homes, the second star attraction is, appropriately enough, a piñata.

To get the full picture of Christmas in Mexico, read the full story at Ornamentshop.com. Then, in the spirit of Mexico, share it with your friends on Facebook and Twitter. Just don’t be surprised if you soon develop a strong craving for a crunchy beef and cheddar taco and an ice-cold beer.